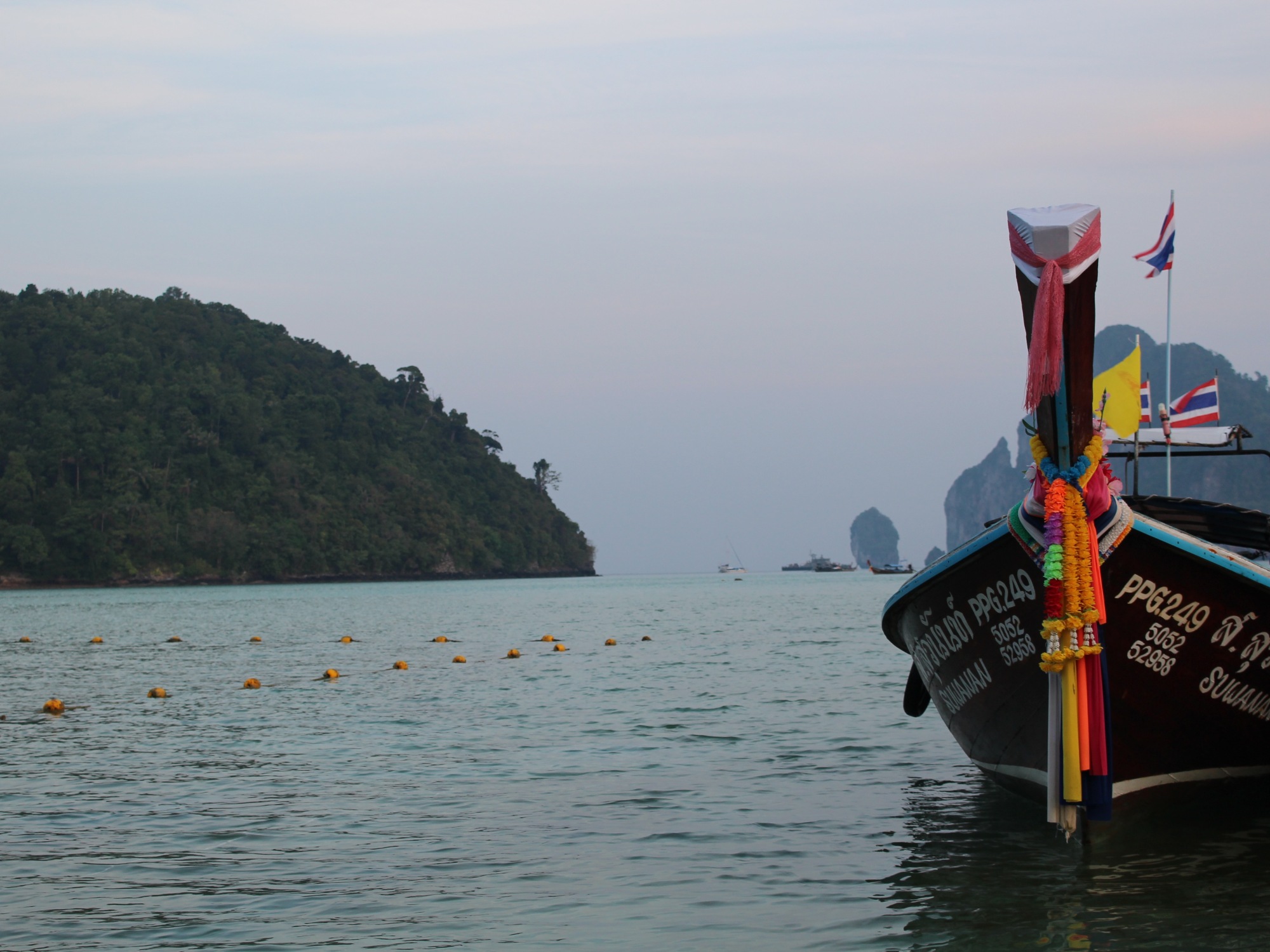 The first piece of advice we were given when we moved to China was to get out of the country during the two national holidays unless we wanted to deal with mass amounts of traffic and businesses closing as people tend to travel home to be with their family during this time. We were also told to book flights well in advance, but having a trip to Vietnam under our belts during the mid-autumn festival the previous year we were not overly concerned. We decided February would be a nice time to visit Thailand, and unfortunately about half the country of China thought the same thing…

When we planned out trip to Thailand we divided into two major parts: the islands and the North/historical sections. David was interested in all the different island options and I was more interested in the history section, so we divided and conquered the hotel/tour/misc bookings separately keeping in mind what the other person liked/might not be as interested in. It was difficult to start planning this trip too early as we were still trying to figure out what we were going to to in Hong Kong and Hainan over Christmas, so booking things this far out was challenging to say the least. We did manage to book our flights about two months in advance because we knew the prices were already going up a lot, but we decided to hash out the rest of the details when we returned in early January. Fast forward to late January when we were actually booking hotels and our options were significantly limited as most hotels were sold out. We managed to find some nice places with decent reviews, but we likely paid slightly more and sacrificed location a little in Chiang Mai to do it.

The day we were supposed to catch our evening flight to Krabi –> Koh Phi Phi I asked David where we were staying that night. He said Koh Phi Phi. Well that’s a problem…the boat from Krabi only runs at 9:30am and 3:30pm, so I was not sure what he intended us to do between 12am and 9:30am. Turns out he had misread a few things about boat frequency and how late we were getting in and there was no way we would make it to our actual hotel that evening. I booked a cheap $15 B&B near the airport and we were off. When we arrived at said last minute booked B&B, all lights were off and doors locked. We called the number on the door several times before someone finally woke up and came to let us in. Once we got to our room David was completely sketched out and thought we would surely be murdered in our sleep to which I countered it would likely be better than sleeping on the side of the road, clearly his previous intention. (Note to self: late night flights do not make you or your spouse more patient and less hostile, perhaps we’ll avoid those in the future). The B&B looked clean and the room cooled off super fast with the wall A/C unit, so all things considered, I called it a win. We survived the night and were off first thing in the morning to try to catch a boat to Koh Phi Phi!

Our actual hotel was quite an upgrade from the little side of the road B&B with a nice pool and right on the beach, perfect for relaxing and reading. The island itself had a distinct “party island” feel as most of the visitors are younger and either look like they are super hungover and/or work out a lot. For those of us morning people though this is a huge bonus as generally there is no one alive before 10am! I got to have the island to myself for a few hours one morning which was nice. We were also fortunate that our hotel was a little farther from the party scene, so it was not too loud at night. In the end we did not get to check out the beach party scene as we missed our first night there, the second night we got a fish/back massage combo & did not know where everything was yet, and the third night we were planning to get to bed at a decent hour because we had to get up super early to check out and then go on a snorkeling trip. While my inner old lady rejoiced, my Dora the explorer side was left unsatisfied…

The fish foot massage was extremely bizarre and awesome at the same time. They wash your legs and feet off to make sure you have no sunscreen/bug spray/other chemicals that could harm the fish and their watery home and when you stick your feed in their tank the fish just swarm your legs and feet! It was so intense we could not stop laughing for a full 5 minutes. Eventually we got used to the sensation and were able to relax and enjoy the experience, but it was quite wild.

We also enjoyed a hike up to the viewpoint as well as some snorkeling (minus the part where I got stung several times by jellyfish…again). There are lots of little shops on the island and the section right off the pier is extremely touristy with many shops, restaurants, and hotels lining the streets. At this point we were glad we had one of the closer hotels because it made dropping our stuff off much easier and meant we were close to the water. Overall we found the food on the island to be really good, and fruit and coconuts are quite plentiful. The prices for food and souvenirs are noticeably higher than the main land, but still not too bad compared with some other countries.

Snorkeling was a fun activity, but I will not say it is the best I have ever seen. We took a Phi Phi Leh snorkeling trip which included Maya bay (made famous by the movie “the beach”, previously unheard of, now swarming with tourists) and two other spots around the island. The longtail boat we took out had motor issues for about a half hour before they brought us back in to change boats. The engines on these boats are not always in the best shape, but the company assured us this was a-typical for them, so we let it go. The first place we stopped was quite choppy so the water was stirred up and I did not see a great variety of fish or other sea life.

I also kept feeling little twinges in my arms that would sting and itch for a second and then fade. At first I was not sure, but quickly I realized I had experienced this feeling before and it must, in fact, be a bunch of really small jellyfish that I kept swimming through. The company who took us out loaned us wet suits, so only part of our arms and legs were exposed, but it was enough to catch a few sting here and there. The last straw was when I got a long blistery patch across one of my legs and realized there must be a bigger one about, so I got out of the water a little early and waited for everyone else to finish. David found a larger orange jellyfish he was trying to chase around and get pictures of, but none turned out really good, so I will leave them out. I an only assume that might have been the last one I encountered. The shallower water in Maya bay actually had some better snorkeling spots and I found a bunch of really neat fish among other things living along the coral and rocks. 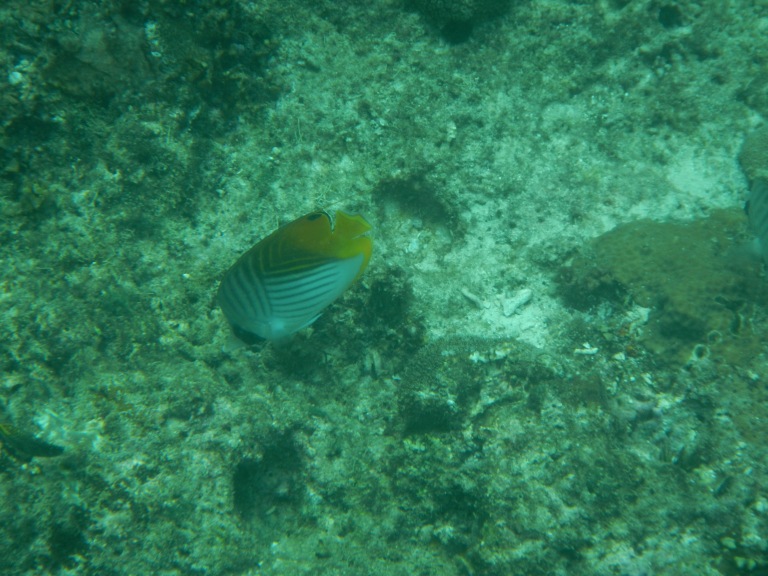 Overall I have had better snorkeling in Hawaii (Oahu in-particular) and it’s hard to forget the great barrier reef as well. It was still a fun trip though, and there were other snorkeling options that included sharks, but David is terrified of them, so we did not get a chance to try that trip. The last stop of the snorkeling adventure was a quick visit to monkey beach where the cheeky monkeys will come right up to you and try to steal your stuff if you are not careful. There were several people there when we arrived feeding and offering the monkeys drinks. I hung back a few feet as the photographer, I’ll take my chances with the sharks thanks, they’re not known for rabies. 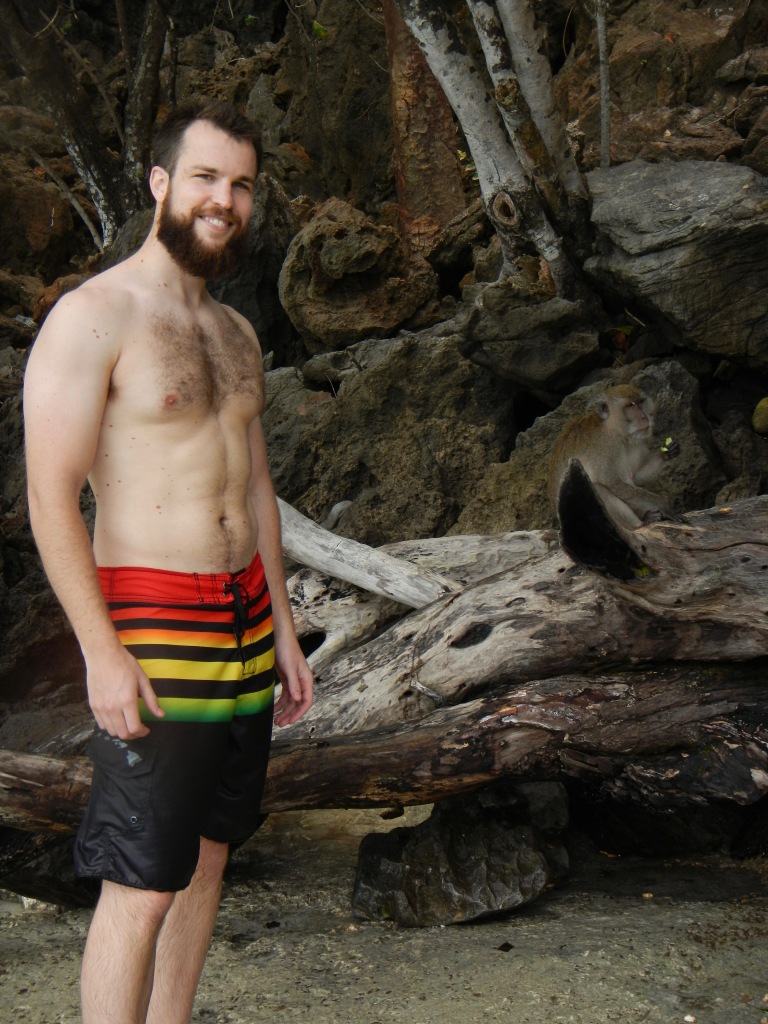 The beginning of our trip in Thailand started off great in Koh Phi Phi. This will be part 1 of an approximately 4 part series on our recent adventure in Thailand so stay tuned for more later!